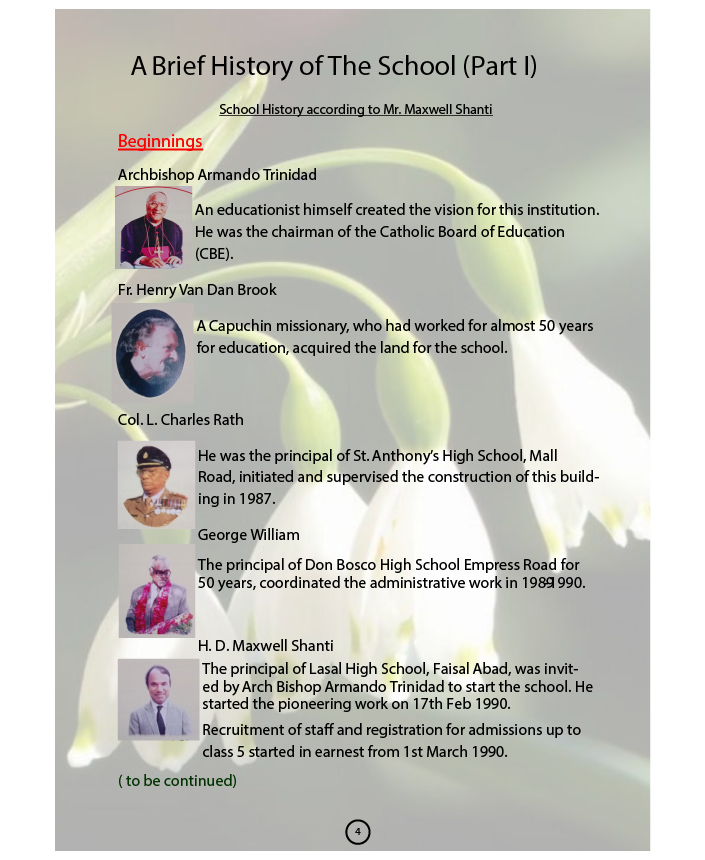 An educationist himself created the vision for this institution. He was the chairman of the Catholic Board of Education (CBE).

A Capuchin missionary who had worked for almost 50 years for education. He acquired the land for the school.

He was the principal of St. Anthony’s Mall Road, initiated and supervised the construction of this building in 1987.

The then principal of Don Bosco High School Empress Road for 50 years, coordinated the administrative work in 1989 and 1990.

Mr. Maxwell Shanti, the then principal of Lasalle High School Faisalabad, in 1990, following the will of God moved to Lahore, as per the invitation by the Archbishop Armando Trindade to start his new apostolate, to serve as the principle at St.Anthony’s highs school, Faisal Town. He started the pioneering work on 17th Feb 1990.

Recruitment of the staff and registration for admissions up to class 5 started in earnest from 1st March 1990. The first appointee was Lal Masih, the gatekeeper who is well remembered by all the old students of the first ten years. The second appointee was Mr. Inayat Nawab, office secretary, who handled all the office work single-handedly. The first teacher to be appointed was Mrs. Wajid Bennet, who was teaching in Cathedral School.

The school was ready to start on 7th April 1990 with classes 1-5 with 242 children.  On the first day, there were only six teachers, one administrator, one gatekeeper, and two cleaners. The teachers present on the first day were Mrs. Wajid Bennet, Miss Bina Imtiaz, Miss Amna Bukhsh, Miss Jacoline William, Miss Caroline William, and Mrs. Sheena Farooq.

In 1993 the land adjacent to the school of one canal was bought, and a nursery class and a basketball court were built on it. Due to the ever-increasing numbers and demand by the parents for a complete pre-school with nursery, more classrooms had to be built. For this purpose, another piece of land(a canal) just opposite the school’s main gate was bought, and a complete primary school was built. Classes 1 to 5 were shifted from the main building to the new primary section in 2000. The Primary Block was blessed and inaugurated by His Grace Archbishop Lawrence J. Saldanha on 20th October 2001. By the start of the new millennium, St. Anthony’s Faisal town was on firm footing and on its way for further development.